Stroke is one of the most important causes of death and disability, which can be eminently treated. This condition can even be reversed with the currently available arsenal of intervention devices, if the patient presents within the golden hour or the window period. It is still treatable even when the patient presents outside the golden hour, but the chances of disability may be higher when assessed at 3 months.

31% of stroke victims are under the age of 65 years. Hence, it is the young, productive population, which also bears the brunt. The traditional thinking that stroke is a disease conﬁned to the old and the ageing population is a thing of the past. Hence, the diagnostic and therapeutic armamentarium is continuously evolving for the better.

Age itself is a risk factor for stroke apart from the vascular risk factors like high blood pressure, blood glucose and cholesterol. Sedentary life style is blamed as much for stroke risk as smoking and hence, the popular proverb in todays’ time: ‘sitting is the new smoking’.

We present an 81 year old lady, a known diabetic and hypertensive on Tab Aspirin 75 mg once daily, presented to emergency with sudden onset of left sided weakness with progressive altered consciousness (drowsiness and reduced responsiveness) with onset 4 hours before. She had power, which worsened from grade 2/5 MRC to grade 0/5 within 20 min of arrival to emergency. She was progressively becoming drowsy and less responsive. NIHSS was 22, which means a severe stroke on stroke severity assessment scale.

An emergent MRI was done, which showed a hyperacute infarct (stroke due to lack of blood supply) in the distribution of the right sided middle cerebral artery which gives blood supply to a major portion of the right hemisphere. FLAIR sequence of angiogram did not show the changes, hence we concluded that there was a substantial penumbra or brain at risk, if blood supply was not restored in time. MR Angiogram TOF , which is a reconstructed sequence was done which showed that the MCA was blocked at its origin inside the brain.

We were up with 2 problems at this point.

1. She was beyond the window period for use of intravenous clotbuster drug called tPA by the time MRI was over. We can use it only upto 4.5 hours according to present recommendation. Her age was more than 80 years, hence the bleeding risk would also be higher, if the drug is used

2. PT/INR or the coagulation test showed that it was prolonged with a value of 1.9. Hence, it would further increase the bleeding risk if given to her The same was discussed with the family and it was unanimously decided that we will not give the clotbuster drug. Then, what next? How should we restore the blood supply to the brain at risk?

This is where the protocol for Stroke treatment has changed since the landmark trials of 2015 (MR CLEAN, ESCAPE, SWIFT PRIME and others). This protocol demands that an angiogram of major vessels of the brain is done via a groin puncture (c-DSA). The same was done and it revealed that the MCA was still blocked at the origin with not much of collateral blood ﬂow, which indicated that the area of the brain would be irreversibly infarcted or dead. Hence, our Interventional Neurologist passed a guide wire through the groin puncture.

This case study is an example of direct mechanical thrombectomy when intravenous clotbuster drug cannot be administered due to high bleeding risk or the patient presents outside the window of 4.5 hours.

The time window for mechanical clot removal has been extended after the recent DAWN and DEFUSE-3 trials. Mechanical intervention can now be done in selected patients, upto 24 hours. These are the patients who have a small core area of infarct on diffusion MRI and have a dense neurological deﬁcit (high score on NIHSS) or in other words- a ‘core-clinical mismatch’. The vessel study (CTA/MRA) at the time of presentation to emergency is mandatory.

If there is no occlusion of large vessels (proximal MCA, ICA, Basilar artery) on CTA/MRA and the patient is within the window period of 4.5 hours, just giving IV clotbuster drug is sufﬁcient.

The stroke treatment protocols are continuously evolving with newer diagnostic technology and better intervention devices. As the scientiﬁc literature builds up we may have more changes in the protocol mentioned in this article.

However , aim of stroke treatment will always remain the same- ‘TIME IS BRAIN’. Every minute counts after stroke and minutes lost means millions of neurons lost. Quick recanalization with reperfusion of the ischemic brain will be the way forward. We should work towards improving our door to needle and door to balloon time and minimize the in-hospital delays and bottlenecks. We should also work towards increasing stroke awareness in the neighbourhood. Educating the laymen is the best way to bring the patient to the hospital within the golden hour . 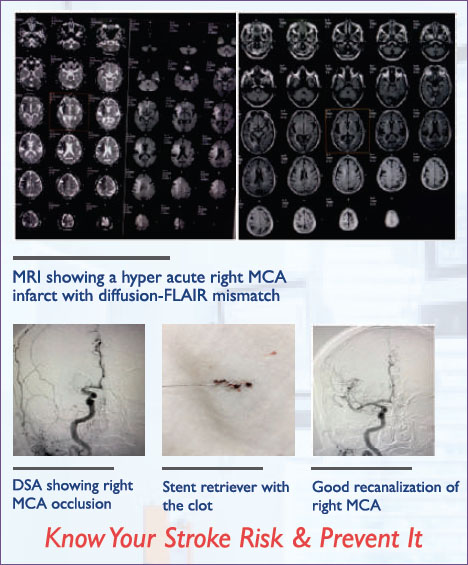